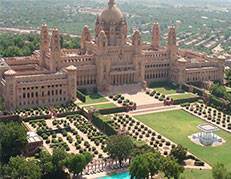 The Umaid Bhawan Palace at Jodhpur, India's last great Palace, was constructed between 1929 and 1944. Constructed in what can loosely be described as the Indo-Art-Deco style, this magnificent edifice with 347 rooms is the world's largest private residence when it opened its doors as a royal residence in 1944. Named after The Late His Highness Maharaja Umaid Singhji, the palace has been the residence of Maharaja Umaid Singhji and his successors. The Central Dome soars 110 feet overhead, and provides spectacular centerpiece - a focal point for all the visitors to the property . The view from the Pillars, especially at sunset, are spectacular. Landscaped gardens adorn the exteriors of the building and the spacious lawns at the rear of the Palace create an ambience which is at once serene, restful and yet spectacularly royal. 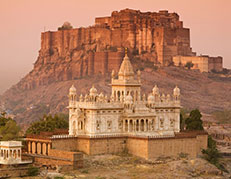 The impregnable Mehrangarh Fort, which rises above the city, is one of the largest forts in India. As impressive as it is, as a well preserved heritage structure, there's so much more to discover inside. One of the highlights is the museum, which houses an outstanding collection of fine and applied arts from the Mughal period of Indian history. It even has the only professional museum shop in India. 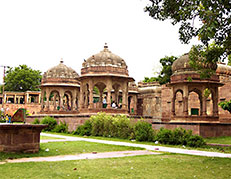 Mandore was the capital of the Marwar region before Jodhpur was founded but now it's in a miserable condition. There's an old fort, as well as an eclectic collection of temples and cenotaphs, and a small museum, in the Mandore Gardens. It could be a really attractive tourist spot if it was properly maintained. The monuments are in ruins and garbage is often scattered around. It's still worth a visit though, for the amazing architecture and history of a bygone era. 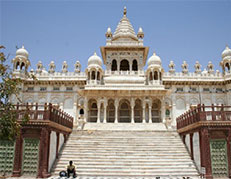 To the left of the Mehrangarh Fort compound is the Jaswant Thada of Jodhpur, Rajasthan. It is a 19th century royal cenotaph built in commemoration of Maharaja Jaswant Singh II, the 33rd Rathore ruler of Jodhpur. The son of Maharaja Jaswant Singh, Maharaja Sardar Singh, in the memory of his father, built the Jaswant Thada. The cenotaph has two more tombs within it. Near to this are the royal crematorium and three other cenotaphs. 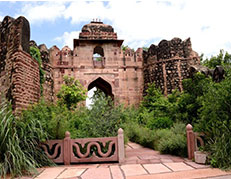 Rao Jodha Desert Rock Park was created in 2006 to try and restore the natural ecology of a large, rocky wasteland next to Mehrangarh Fort in Jodhpur. It had suffered years of neglect and was overrun by baavlia (Prosopis juliflora), an invasive, thorny shrub introduced from central America almost a century ago. The challenge was to eradicate the baavlia and create a suitable home for native rock-loving plants that we would bring back from the desert. 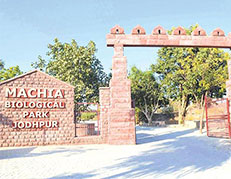 Machia Biological Park will be opened for public in March which will thus put Jodhpur on the eco-tourism map of the country. Spread over 41 hectare, the Rs 32.30-crore biological park will house lions, tigers, jackals, hyenas, desert cats and desert foxes from different zoos across the country, including Jodhpur zoo. 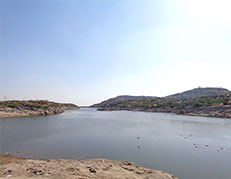 Kaylana Lake is located 8 km west of Jodhpur in Rajasthan, India. It is an artificial lake, built by Pratap Singh in 1872. The lake spreads over an area of 84 km2. In ancient times this region had palaces and gardens made by two rulers of Jodhpur - Bhim Singh and Takhat Singh. These were destroyed to make Kaylana Lake. 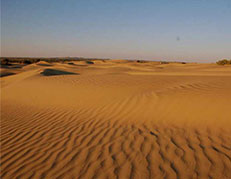 Osian (Osiyan) is an ancient town located in the Jodhpur District of Rajasthan state in western India. It is an oasis in the Thar Desert, and has been known as the "Khajuraho of Rajasthan" for its temples. The town is a panchayat village[1] and the headquarters for Osian tehsil. It lies 69 km (43 mi) by road north of the district headquarters at Jodhpur, on a diversion off the main Jodhpur – Bikaner Highway. 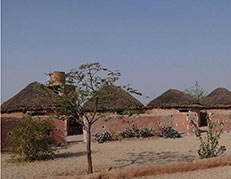 Guda is scenic beauty marked with Khejri trees and deer. Also in the village is the guda bishnoi manmade lake, around the lake you can see numerous migratory birds like domicile, cranes etc, blackbucks and chinkaras. This pond is drinking point for the antelopes blackbucks and the migratory birds. This village is a kind of desert oasis. It is the perfect place to experience the tradition & customs of tribal life. It is a place caught in a delightful time wrap where life still goes on like the days od the past.